“Sorrow” and “Lost” songs became film scores in the Escape 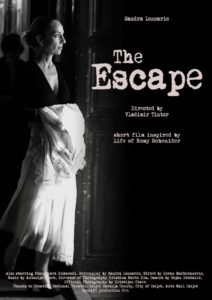 Talented Sandra Loncaric, a renown Croatian actress, just finished her short film, the Escape, inspired by a life of Romy Schneider. It is a great honor that Sandra chose my two songs, Sorrow and Lost as her film scores. The film will be presented for the first time on a prestigious international film festival in Vukovar on 25.8.2018. Sandra wrote the screenplay, acted and co-directed the film.