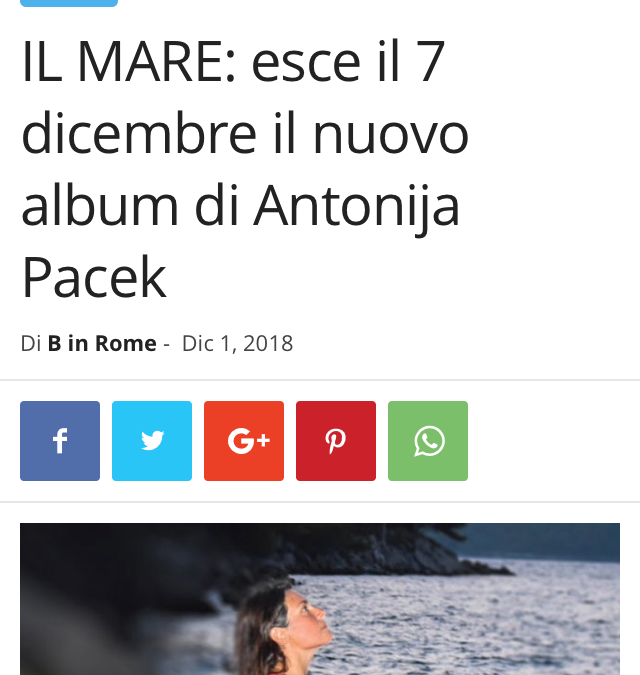 B in Rome magazine reports: The challenges to which life subjects us every day, the lasting influence of a great loss, the disappointments of friendship and the sense of forgiveness, faith and trust in one’s actions and thoughts, a sad film, but also happy moments: these are some of the main themes that inspired the new album by Antonija Pacek: “IL MARE”.
There is a sea of emotions that is intertwined in the thirteen original compositions that the pianist of Croatian and Austrian origin has created and interpreted in her third, highly anticipated album: it is instrumental pieces seasoned with poetic imagination and unexplored sounds that will surely hit the sensibilities of the listeners of every story, geography and generation! During Antonija’s stay in her summer house right next to the sea, the artist found there a meditative clarity and a creative energy that led her to compose songs such as Forgive, Magic Forest, Viva Life and Back to Faith.
“IL MARE” will be published via spinnup (Universal Music Group) and available on the major digital streaming and download platforms (such as iTunes, Amazon, Spotify, Deezer, Tidal, Google Music, etc.) as of Friday, December 7, 2018.
In the coming weeks, the album will be broadcast by prestigious radio stations, including Radio Klassik in Vienna; Twentysound Radio in Berlin; Radio Kristall in Milan; Shades of Classics in Canada and Whispering Radio, in the United States
Antonija Pacek has been able to transmit to a multigenerational and multicultural audience a true passion in the way of playing and interpenetrating life through music. After the success of “Soul Colours” and “Life Stories”, a new tour is scheduled for 2019 in Italy, Austria, Croatia and the Emirates.